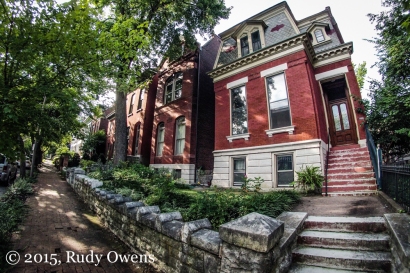 This neoclassical mansion from the pre-Civil War era was almost destroyed to build Interstate 55, but thankfully activists spared it from the wrecking ball. It is located overlooking the freeway, next to the Lemp Brewery complex. 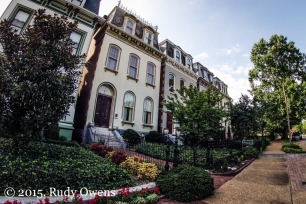 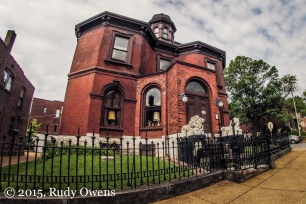 A Romanesque style house is a testament to St. Louis’ beautiful use of bricks.

I grew up in Metro St. Louis until I was 18. I did a fabulous city architecture tour in my senior year of high school and was blown away by the depth and richness of St. Louis’ architectural past. I learned it was misfortune and visionary legislation that made this possible.

A disastrous and deadly fire in 1849 led the city passing an ordinance preventing the construction of wooden buildings. The easy access to clay deposits led to a boom in brick buildings that provide a richness almost unparalleled in any American city. The money from the industrial era and real-estate speculation allowed for the construction of amazing homes and neighborhoods, even though slums were widely prevalent. Those gems from the golden era of St. Louis remain today. The pictures here are from the historic Cherokee Street area, near the river in South St. Louis, and the Lafayette Square area, in south central St. Louis. In racial terms, those remain mostly white, but that is also changing. Cherokee Street now hosts Hispanic celebrations, due to their large presence.

A web site dedicated to St. Louis’ diverse architectural styles provides a nice overview for those who do not have a background in architecture, with a nice sample of the gems any visitor can find with a map and simple curiosity. The styles I have captured are mostly Second Empire, inspired by French designs, and one Neoclassical design for the Chatillon mansion.