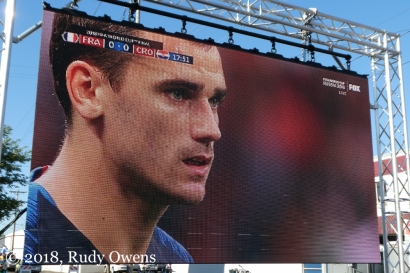 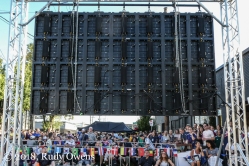 An outdoor screen was put up outside of the Toffee Club for the France-Croatia match in the 2018 World Cup final. 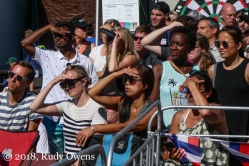 Fans catch the action on the outdoor screen at the final game of the World Cup on July 15, 2018, at the Toffee Club in Portland.

Rudy and fellow cup lover Dylan before the match. 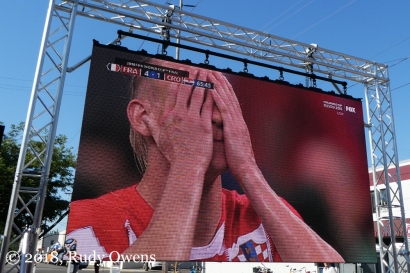 The agony of allowing Kylian Mbappe to score.

Victory hug for Kylian and Didier.

It was mostly pro-French at the Toffee Club for the final game on July 15, 2018.

At last, the World Cup drew to a close with a brilliant final game between tournament favorite France and scrappy but talented Croatia on July 15, 2018. It was the most exciting final World Cup match I’ve ever seen, and I haven’t missed one since 1982.

Both sides attacked, though France had far less possession, and for much of the game it seemed as if Croatia was the dominant team. In the end, France broke the Croatian defense on two fast-break attacks that saw superstars Paul Pogba and the new wunderkind, 19-year-old Kylian Mbappé, each score nice goals in the second half.

The best goal of the match, beyond question, was the 1-1 equalizer by Ivan Parisec, shortly after France went up 1-0 after an own goal by Croatian star Mario Mandzukic. The Juventus player, Mandzukic, redeemed himself brilliantly sneaking in a goal due to terrible goalkeeping clearance by the French keeper Hugo Lloris that put the score at 4-2.

Putin Can Claim Victory too

The entire proceedings went oddly off-track when members of the Russian protest music group Pussy Riot invaded the pitch in the second half, causing looks of confusion by everyone. They were dragged off the field with no comment from the broadcasters, who were mostly tongue-tied.

The protest was seen by easily more than a billion people, putting a measurable chink in the tournament that Russian president Vladimir Putin organized to show the world his style of authoritarianism is a preferred alternative to democratic nations in Europe and North America. In many ways, Putin’s Russia was the real winner of the 2018 World Cup, having earned favorable press from the international media and visitors since mid-June.

The BBC noted two days before the final game, “A successful World Cup does not change the trend: in recent years democracy, human rights and freedom of speech in Russia have been under attack. An increasingly belligerent Russia annexed Crimea and has intervened militarily in eastern Ukraine. Russia stands accused of cyber attacks, of meddling in western elections and of carrying out the Novichok nerve agent attack in Salisbury.”

Since mid-June, I have enjoyed many great games during the cup at the Toffee Club, which is where these shots were taken. They closed a block of SE 10th Street, created a beer garden for morning drinkers, put up a big screen TV, and replicated what most of Europe and other parts of the world do when the World Cup is playing.

I joined a work colleague, his French wife, and friend. Most of the fan base was leaning French. We had a blast, and the game offered plenty of reasons to celebrate both teams.

I found many of the French fans there a little too pretty and too precious. It may have been a class issue? Maybe they spent their summer holidays in France? But they likely have nothing in common with the mostly poor and scrappy French players who trace origins to Africa and who grew up in the poorer Parisian suburbs.

Personally, I missed the vitality I always have found with Brazilians, Argentines, Mexicans, and other nationalities of the Americas that I have watched cup finals with. There were no drums. There were no whistles. There was no dancing.

It’s sad to see it end, but the Women’s World Cup is only a year away. That should be great too.