The Boji Tower in Lansing 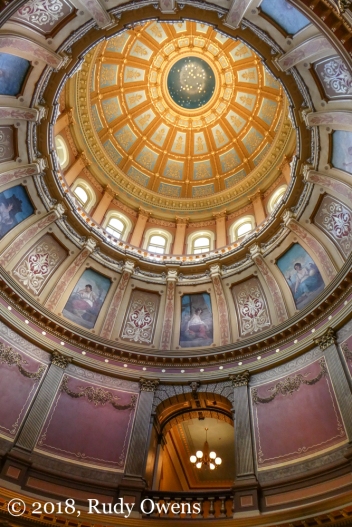 Looking up at the Capitol rotunda, in Lansing 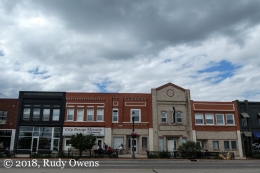 Lofts at the Cooley School of Law Stadium, home of the Lugnuts

This week I visited Lansing for the first time. Let’s be clear. The capital city of Michigan is not on most travellers’ A-list for tourism. Lansing is where you go if you are interested in deal-making and crafting legislation in Michigan.

I came for one reason only: to speak to state lawmakers and their staff, in order to promote legislative change to reform Michigan’s adoption laws that deny all Michigan-born adoptees equal rights by law. (See my website for my book, You Don’t Know How Lucky You Are, focusing on adoptee rights issues for more information.) I also brought my sturdy Panasonic-Lumix DC-ZS70 camera, hoping to take a few pictures of a new place.

With just 116,000 people, Lansing is not a large city. It caters, like much of Michigan, to the internal combustion engine in design and layout, except downtown. There, everything revolves around the state Capitol Complex, which houses Michigan’s state government services. The epicenter of that is the Michigan State Capitol, which opened in 1879.

All told I spent two days in the city. I commuted to the capital from a run-down hotel in neighboring East Lansing, home of Michigan State University. The MSU campus surprised me with its stately academic buildings and serious efforts to encourage transportation to the campus by bike and bus.

Lansing is an older Midwest city attempting to revitalize its urban core along the Grand River. Upscale loft style condos have been built near the river in downtown and next to the Cooley Law School Stadium. The ballpark is home to the city’s minor league club called the Lugnuts—and what a great name. They were away when I was in town.

Not far from these gentrifying spots are social service centers on Michigan Avenue helping the area’s homeless. Signs in neighborhoods make clear residents are united in fighting crime and that the city is struggling, with 17 percent of its residents living in poverty. One report from four years ago claimed Lansing was among the county’s poorest capital regions.

I greatly enjoyed my walk along the Lansing River Trail. The trail is actually a 20-mile network of converted railroad lines that link Lansing with the MSU campus and the greenways south of downtown. I loved it.

I also enjoyed the Lansing Brewing Company, next to the Cooley Law School Stadium. I tried one of the local stouts and was surprised by its freshness. It was a beautiful late spring night when I came, and everyone was enjoying the nice weather, bluebird skies, and camaraderie that one finds in brewpubs nationwide.