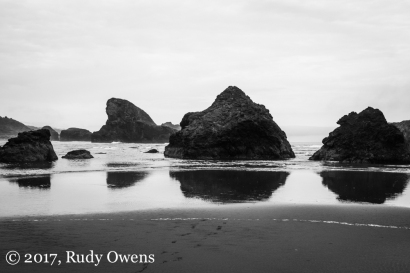 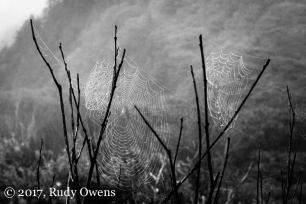 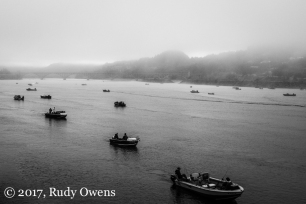 During the first week of August 2017 I took a road trip to a part of the state I had not seen since 1987. My original plan was to visit multiple surfing beaches south of Coos Bay and try them out with my nine-foot Stewart surfboard. Well, that was the plan. My plans changed, and everything worked out well. I decided to tell my story in black and white images that capture the feel of the place.

I first stopped at Coos Bay, a city still gripped by economic woes. It has a nice surfing location on the south jetty and some beautiful beaches and state parks on the west and southwest corner of the community. But the surf was rough when I arrived, and I decided to push further south to Port Orford. The small community of little more than 1,000 is about 60 miles south of Coos Bay and has a beautiful cove and southwest facing ocean view. Sadly, I found no real waves the day I arrived. I picked another surfing spot one mile south of Port Orford, called Hubbard Creek. There, the breaks hit close to shore and I was skunked. With temperatures in inland Oregon hitting 105F, it was still a great day to be in the water on the coast, and I found the water temperatures about five degrees warmer than in northern Oregon.

I then spent two glorious nights at Humbug Mountain State Park, about six miles south of Port Orford. It has a beautiful and large campground, well-maintained by volunteers and the camp host. There must have been well over 400 people there both nights.

The park’s only downside was the truck and road traffic next to the campground. On the upside, there is walkable beach access and a clean creek next to the campground. I climbed the 1,700+ foot mountain, played photographer, and watched one of the nicest sunsets of my life here. I tried to surf my first morning, but the waves also pounded close to shore. So I was skunked again for the second day.

The highlight of my trip was being befriended by families from California camping on both sides of me. Who says Californians aren’t nice? The experience reminded me how fun travel can be and how nice people can be when you are ready to welcome positive energy. Two young girls of one family I spent a day with from San Jose dubbed me “Shmoosh Broccoli” because of my green tent. The name will stick.

The following day I headed south. The area has phenomenal beaches. I stopped briefly in port city of Gold Beach and caught the spectacle of a salmon derby and the steelhead and Chinook run at the mouth of the Rogue River. Scores of boats were circling the river mouth, casting for fish. Everything was shrouded in mist. It was a beautiful moment.

Loaded with warm coffee, I then drive about five miles south of Gold Beach to Cape Sebastian State Scenic Corridor, which has a lovely protected surf spot called Hunter’s Cove, as well as some of the most amazing beach scenery in the state, with basalt seastacks jutting out of the beach and ocean. It is easy to put in here at the Highway 101 turnoff and viewpoint.

Finally, I finally caught many lovely rides. It was the first time I surfed without booties or gloves in Oregon, and I loved the feeling of the board on my toes. I also spotted a juvenile sea otter. The little critter did not see me at first and practically flipped when it realized a guy in a wetsuit was next to him in the water. The species is now making a comeback in the state.

After my surf, I drove another 20 miles to Brookings, a coastal community with a large fishing port and lots of nice camping spots upriver on the Chetco River. My dream of surfing here was dashed. The forecast predicted one- to two-foot waves. I decided not to spend the night and head home early. In the winter, the south jetty of the city is famous for its protected breaks. Maybe I will come back again.