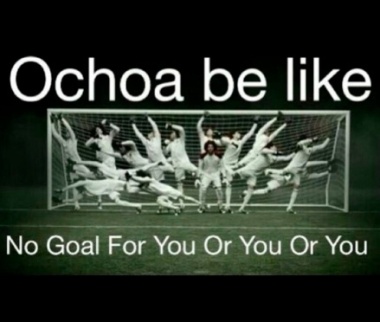 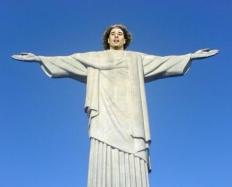 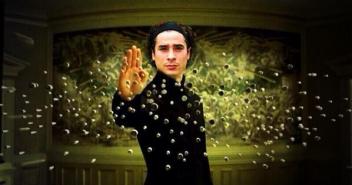 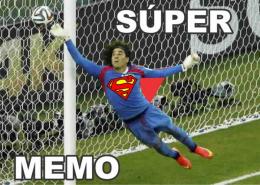 I am a soccer fanatic. Yes I am. I played all my life, back on defense, until I tore my ACL for the second time in 2005. But I still love “el jogo bonito,” as the Brazilian hosts call it. And I love great sportsmanship, great team efforts, and great displays of soccer excellence (yes, I will use the Americanism, not the universal term futbol, as I am writing mostly for an American audience).

On June 17, the Mexican keeper Guillermo “Memo” Ochoa put on a  show that dazzled the world soccer community at the 2014 World Cup in Brazil. Mexico tied Cup host Brazil to a heart-thumping 0-0 draw. Miraculously, every time the yellow jerseys looked certain to score against the Tri, the defiant Ochoa said with a block and deflection, not today, you shall not score. I would say nearly every Brazilian old enough to watch television regrets that this amazing, young Mexican sports star had ever worn the Mexican jersey, and every Mexican knows who he is and why he suddenly became a national hero.

Ochoa showed that a great defense can beat even the best offense. You do not play like this every day. You have to be in the zone, when everything happens slowly, deliberately, as if in pre-ordained fashion. And so it was written, 0-0, with both teams grabbing a single point and left to wonder at what happened on the pitch at Fortaleza, Brazil. It was magic, and thanks for the show Memo.

A day later, of course, or likely in real time, the social media world was ablaze with Ochoa memes. Here were a few I found online, and to me they represent a brilliant form of creativity and enthusiasm for a game that, well, is more than a game. Also, this is one of the rare times I am going to republish material that I did not create. These images are by their instant distribution and fusion of different forms collective art, and now part of the global media landscape. (Last I checked, they also are not copyright protected. I’ll take them down if someone points out these are.)