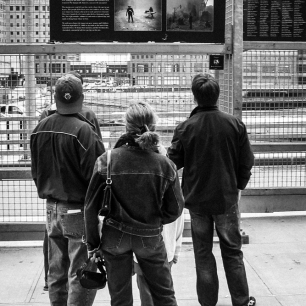 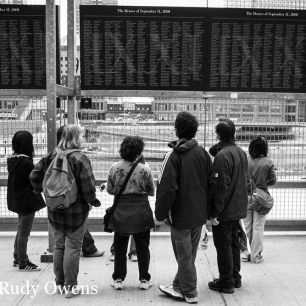 It is hard to believe 15 years has passed since the most important recent historic event in my country took place on the beautiful September day in 2001. I remember everything about it. I watched the replays on the TV and yelled, waking my housemate. I remember our nation’s ability to come together in the days and hours after this attacked, as demonstrated in my home of Seattle, where thousands gathered to express sorrow, unity, and hope. I grew concerned seeing how laws were passed by Congress that were never even read by some members, notably the Patriot Act, all in the name of national security. And then there were the two wars, and conflicts still rage in Afghanistan and Iraq.

The Seattle Sikh community gathered days after 9-11 at the Seattle Center to express both their loyalty and concern in the aftermath of the attacks.

Yes, the day completely changed history, in the United States and more dramatically in the Middle East, especially for millions of innocent Iraqi civilians.

I dug these pictures out of my archive. I visited New York City in April 2005, to see Ground Zero and to see the scope of what happened. Work had already begun to build One World Trade Center. It was a silent place amid the bustle of the Big Apple. I am so glad I went.

This homeless encampment is underneath Interstate 405, next to the city’s affluent and trendy Pearl District. Portlanders of all income levels literally walk by these mini shantytowns daily, and their number is growing citywide this year as rents continue to rise dramatically–more than any other city in the nation.

This row of old Portland homes is about three blocks from areas where the city’s homeless encamp daily, underneath Interstate 405.

(Photos taken three blocks apart. Click on each photo to see a larger picture on a separate picture page.)

Last week I attended an event where participants discussed the regional crisis around homelessness. The City of Portland has already declared a housing crisis, to confront rents that are climbing fastest here than any city in the country. The average rent has climbed more than 40 percent since 2010 (data from 2015, and only worse since). The Guardian newspaper in February reported “shelter for the homeless has become anything but discrete.” The Guardian reported: “Portland saw rents appreciate nearly 15% in 2015 – the highest increase in the nation – with an average rent of $1,689 per month, according to real estate company Zillow. Five years ago, it was around $980.” A person I heard at the forum I attended described the tent communities positively, even one downtown at the entrance to Chinatown, for being self-run. Others I know have described such shantytowns as frightening, particularly for single women walking by. The person who shared their concerns with me about the Chinatown situation travels by that shantytown everyday (and, yes, I will call them shantytowns).

Tents encampments are widely visible under most overpasses, under bridges, in rights of way like the Springwater corridor, and in public parks. There is nothing sanitary about them. Trash is strewn all around them, and it is doubtful the residents of these tent encampments are using sanitary systems to dispose of human waste. Many of these residents also have drug and mental health issues. And the situation has grown dramatically more visible since I first arrived in September 2014.

Some places once that had green spaces on state right of ways now have a tent encampment of at least 15 units, all over the city. In February, Portland Mayor Charlie Hales legalized camping by homeless residents. Portland and Multnomah County claim they will spend up to $30 million to fight homelessness and offer more affordable housing. But that will not happen til July this summer. We will see what happens.

Seattle’s Mayor, Ed Murray, has taken on tent cities as failures, and his hired expert claims tent cities prolong the homeless problem without solving it. This came after a shooting at Seattle’s notorious “jungle,” which attracted national attention. In that attack in January this year, two were shot dead, and three badly wounded. One known encampment for homeless residents on the Springwater Corridor trail, in nearby Gresham, was the scene of a reported sexual assault by a recently released ex-convict, who was apprehended the same day, on March 25, about a half mile from my house. As someone who once passed homeless encampments every day for two years in Seattle and who sees homeless encampments every week in Portland, I do not have a magic solution. The housing bubble is certainly a root cause to the crisis, along with national economic issues and income inequality, plus regional market forces. So long as rents continue climbing in cities like Portland and more Americans cannot find stable housing with low paying jobs, they will flock to the Northwest, and its many mini-jungles, along with the more brutal Skid Row in Los Angeles, home to an estimated 40,000 to 60,000 homeless.

We have had an amazing string of clear, warm evenings. All of them produce scenes like the one here, as the sun sets over the distant Olympic Mountains and boat traffic quiets down near the Fishermen’s Terminal at Salmon Bay. (Click on the photograph to see a larger picture on a separate picture page.) 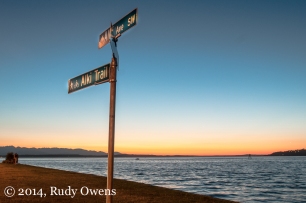 The stretch of beach and road in Seattle that simulates this city’s brand of California is commonly called Alki and Alki Beach. It is a great spot to be on a summer night as the sun goes down and cooler air whips off the Puget Sound. Last weekend salsa dancers gathered on the beach with many hundreds of others to soak it all up. Me too. (Click on each photograph to see a larger picture on separate picture page.)

On these amazingly beautiful summer nights in Seattle, one can finds huge crowds of locals and visitors at Kerry Park, on Queen Anne, snapping photos and gazing at Seattle, the Port of Seattle, and the Puget Sound. It’s quite a nice spot. Come if you can. (Click on each photograph to see larger pictures on separate picture pages.)

The two principal co-founders of Microsoft Corp., Paul Allen and Bill Gates, have both left a huge mark on the region and the world because of the concentration of personal massive wealth and their willingness to use that wealth to express their passions, quirks, and visions. Allen is reportedly just the 26th richest man in America at 61 years of age. He has spread his cash, and a lot of it, in things beyond his mega-yacht, two professional sports franchises (the Blazers and Seahawks), University of Washington buildings, spaceships, foundations, and lots of prime real-estate in the Seattle area. A guitar enthusiast, he helped to fund and build the Experience Music Project (EMP) Museum. Located next to the Seattle Center, this wildly shaped interactive museum, designed by Frank Gehry, pays homage in its name to Seattle’s favorite native-son guitar legend, Jimi Hendrix, as well as Allen’s love of all things science and science fiction.

Gates, at 58, has a net worth of about $76 billion, according to press reports. He remains atop the list of the United States’ mega-billionaires. As many know from countless sponsorship promos, he launched his vaunted and sometimes criticized Bill and Melinda Gates Foundation in 1997, in no small part due to his very savvy wife’s influence. The Foundation reportedly has assets now valued at nearly $39 billion. It remains focussed on global health initiatives, technological innovations to improve global and maternal health, poverty reduction, information technology access, and education. The Foundation’s world headquarters literally sits across the street from the EMP.

For us normal and not-so-wealthy folks in Seattle, we are in the shadow of these very rich and influential super-rich billionaires many times over. I recommend any Seattle visitor check out both facilities. In a short walk, you can gaze upon the manifestations of these two mens’ very large egos that continue to shape not only Seattle, but in the Foundation’s case, quite literally direct the global health agenda. Now that is true power beyond the software running on my desktop and laptops.

The Northwest Folklife Festival takes over the Seattle Center every Memorial Day weekend. As a younger man, I used to gravitate to this like the music and culture lover that I always was and remain to this day. I think I got busier and the crowds got too large, and perhaps too many people appeared stoned and the number of smokers became too unmanageable. That is a story for another time, and it is complex. Anyway, the vibe totally changed. That is fine. For small doses, I still enjoy seeing the music, the dance, and the diversity of people who will turn out on a rainy day to support the arts.

Seattle’s skyline as seen from Gasworks Park in summer 2012.

I cannot count how many nights I have watched a lovely evening in Seattle. It has grown up considerably since I first moved here in the late 1980s (and left several times), but that is a story for another time. Enjoy (shot in 2012). (Click on the photo to see a larger picture on a separate picture page.) 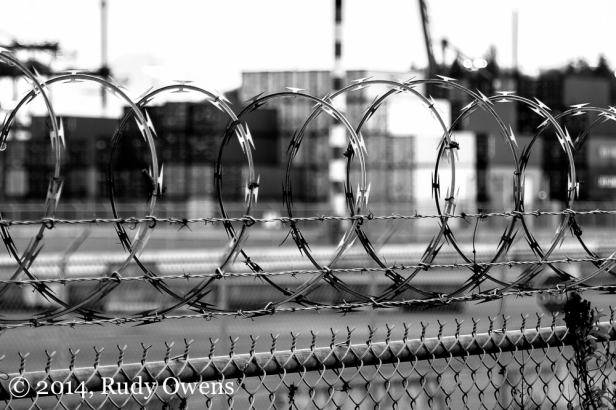 This is a shot of the cargo container yard at the Port of Seattle, from behind the protective razor wire that surrounds miles of land off-limits to anyone but companies who use the port, employees, unions like Teamsters who run the unloading of goods, security teams, and those working on the ships and planes that come and go (2014).

Port authorities, as quasi-public entities, with minimal and almost no public oversight, amaze me with the scope of their power and the size of their land holdings. The Port of the Seattle is the largest property owner in the city. It runs an international airport and one of the country’s largest cargo container ports. Yet almost none of the city’s 600,000 or so residents have the slightest idea what happens behind the razor wire fences. Mainly all of those low-cost Asian-made goods come in, and some of our heavy materials, industrial goods, and agricultural goodies go out. I cannot fault any authority for maintaining security, but is this management structure more about protecting the interests of the large corporations that utilize these public resources for their business models or about keeping our commercial sector safe from “bad guys.” And have no doubt, bad guys do use this port to smuggle everything, from illegal drugs to people. They are like a big no-go zone that everyone agrees is good for all of us. That remains the weird part. Who decided all of this, and who benefits from all of this? (The port would say, I do, with cheap goods and a strong economy, I know.) 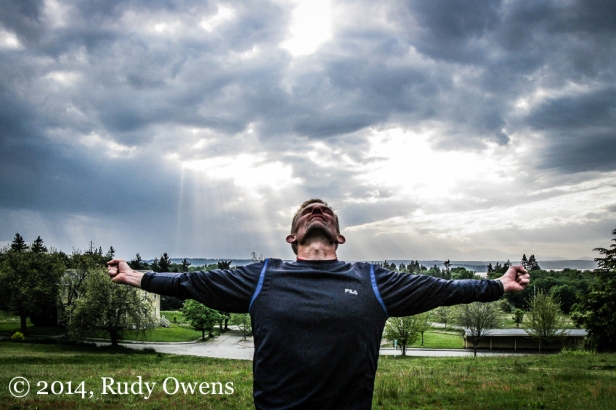 Whenever you accomplish a goal, after investing a lot of work, remember to thank yourself for all that you did. Setting and achieving hard goals is the most satisfying of things to pursue in life.

Normally, I do not like to promote vanity, nor my own mug on my web sites. However, I was thinking about a great time nearly two years ago to the day when I finished my last graduate course at the University of Washington School of Public Health. The value of the MPH can be discussed at another time. And we can have a spirited discussion. I just happened to like how the light broke ever so perfectly. Yes, you are so vain, and this picture really is all about you! (Click on the photo to see a larger picture on a separate picture page.)