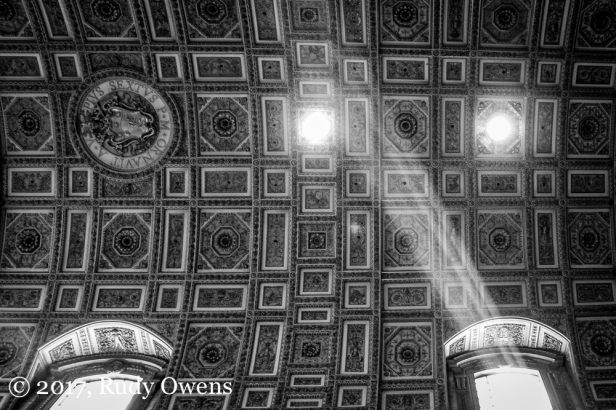 A so-called “god beam” illuminates the vaulted ceiling of St. Peter’s Basilica, in the Vatican City, in Rome.

St. Peter’s Basilica is the heart of global Catholicism and the main house of worship for the Catholic Church in the Vatican City, the tiny but influential nation-state located in beautiful Rome.

I took this shot in 2006. I had a basic point and shoot camera. The lighting as magical inside the massive building, which was designed by Italian architect Donato Bramante, in the early 1500s.

I first remember seeing a painting of the interior of the cavernous and enormous basilica at the St. Louis Art Museum as a kid. That painting, Interior of St. Peter’s, Rome, by Paul Panini Romae from 1731, was on my mind as I wandered in the sanctuary, with thousands of other visitors on a hot October day.

One of the lessons I took away from visiting St. Peter’s and the Vatican City was a simple one. Never underestimate the power of the Catholic Church.