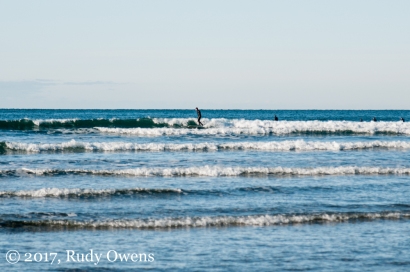 Seaside is a small coastal community about 85 miles northwest of Portland. It is best known as one of the premier surf spots in the Northwest, thanks to the break that hugs the point that juts out into the Pacific just south of the city. The surf website Surfline boasts it offers the “best left-hand pointbreak in North America.” This of course inspires visitors and also localism that has become of the stuff of local legend. A TV news reporter once endured abuse from local bad boys, countered by an effort to counter the incident by locals. There are also stories of slashed tires of those who park near Seaside Point.

I have avoided the beach for months because of the fierce localism reputation the community has earned, but could not resist coming on a day with small waves and clean sets I could see on the local beachcam. I put in at Seaside Cove, which lies just north of Seaside Point. When I arrived at around 10 a.m. on Jan. 6, 2017, clean sets with waves from 1.5 feet to 3 feet were rolling in nicely. Longboarders were popping left and right. The sun was out, and the winds were calm. It was, however, cold. My car thermometer showed 25 F when I stopped. The frigid air did not stop the 30 or more surfers I saw putting in during the next four hours.

My experience proved memorable. It was the first day I caught waves the full distance from the break to the shore. I had overcome a few plateaus, but I still had to work on choosing my waves as far out as I could be. I was hampered by having a “fun board,” which is shorter than a longboard. Longboarders were able to catch the waves farther out, and I could not navigate around them to their spot. Still, it was a perfect day. The scene was mellow and friendly. Whatever reputation surfers have here did not mesh with the vibe I found. I think the perfect winter surfing day put everyone in a great mood. There were more than enough breaks and enough space for everyone, from experienced gray beards to rookies.