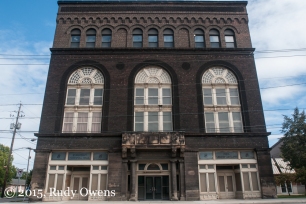 During my recent trip to Ohio and Michigan I stumbled accidentally on two meeting halls that served the needs of Czech and Slovak immigrants in the industrial Midwest, where many central and eastern European immigrants settled in the late 1800s and early 1900s. So-called fraternal organizations were common for Czech and Slovak immigrants in American cities in this era. Outside of churches or synagogues, this was where ethnic identity was allowed to flourish, celebrating the music and dance of the Old World in the New World. I found these two buildings very functional, and sturdy in a Midwest urban way.

However, hard times have fallen on Detroit, and the Detroit Slovak Home is a ghost, whose ethnic enclave has fled to the suburbs and all that remains is another abandoned building on Detroit’s east side, not far from the old Packard Plant. It was among many ethnic houses in Detroit, serving Polish, Lithuanian, German, Ukrainian, and Russian communities. The Bohemian National Home, or Sokol, Greater Cleveland’s Czech Cultural Center, in the Broadway neighborhood above the steel factory, still lives on to promote Czech culture. It too is in a lower-income neighborhood now that is experiencing economic decline.