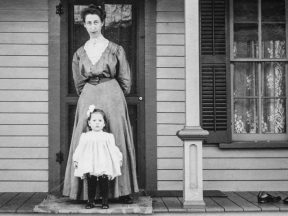 This was taken, I believe, at the family farm, in Michigan.

From time to time I like to publish old photos from the family vault. I am adopted, and it was not until I was 24 when I learned about my biological family ancestry, on my birth mother’s side. Her father, Vyrl Owens, comes from a long line of mostly farmers, with roots in Michigan, Indiana, New York, Vermont, New York, even Rhode Island. They mostly have Welsh, English, and I think a bit of Irish ancestry in there too.

I love old pictures because they show how different people looked before our modern era. There was a certain toughness and resolve. People were not afflicted, yet, with the curse of obesity, mostly because of their diets and because of the hard work most of them did.

Here is a photograph of my biological grandfather, Vyrl Owens, taken when he worked in Greenland under contract, helping to build the Thule Air Base. The black and white photo is of his mother, my great-grandmother, Addie Mae Baker (Owens), and her daughter, Vyrl’s sister, and my great-aunt, Thelma. Addie Mae died in 1977, when she was 93 years old. She clearly was a strong woman. I have her masterful nose. I hope I have her Midwestern, live-long-with-grit genes too.

(Click on each photograph to see a larger picture in a separate picture page.)