I met this laborer during my trip to Vietnam in 2003. The Vietnamese are among the most industrious people I have met anywhere.

I have been fortunate to see how many people work around the world. I have seen flower pickers running at breakneck speed in the pre-dawn hours to their jobs in greenhouses around Kenya’s Lake Naivasha. I have met Mexican migrant farm workers in central Washington state, who pick all of the apples, cherries, and other fruits and vegetables we eat around the country. I have met the men who do the hard labor building roads and buildings in Vietnam. And there are so many more. The work I have seen humbles me in its physical intensity and also brute reality. But people have to work, to make better lives for themselves and their families. So, today, on Labor Day, a moment to honor those who have to use their bodies to eek out a living, where ever they call home.

Click on the photo to see a larger picture on a separate picture page.

Laborers pause inside a hothouse in southern Turkey near Antalya.

Hothouses growing crops for local and international markets were common sights on Turkey’s southern Mediterranean Coast. During my trip in 2001, I travelled the entirety of that coast by bus (loved it!), and had a chance to visit a hothouse by a bus stop. The workers reminded me a lot of the male laborers I saw in my home state of Washington. They were friendly, their clothes revealed the dirt and sweat of their hard labor, and they had pride in who they were. It is a reminder to always stop and just look around the corner and see what you may find. More pictures of my travels in Turkey can be found on my Turkey photo gallery. (Click on the photo to see a larger picture on a separate picture page.) 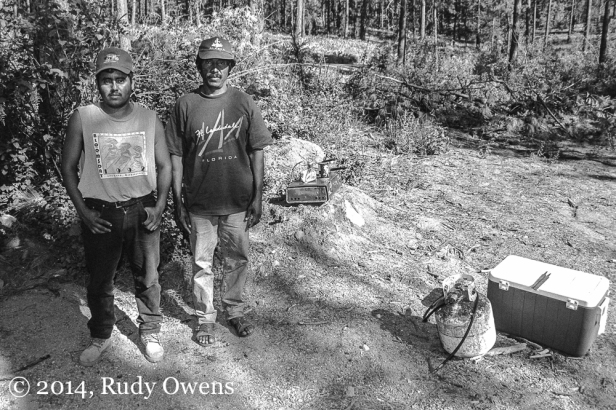 I took this photo in 1999 of cherry pickers who were living in the woods near Wenatchee.

Given that the fate of migrant children from Central America arriving at the United States’ southern border is now an international news story, I decided to dig up and publish some of my picture series taken in 1999, on cherry pickers and migrant workers in Washington state. The agricultural industry in Washington is staffed almost entirely by foreign-born labor to pick, harvest, and sort the many crops from cherries to apples to hops that make your local beer tasty. Some are workers who travel seasonally. Some are brought here under temporary permits, the H-2A visas. Make no mistake, the state’s economy would grind to a halt without these workers, and their work contributes to the wealth of this huge economic sector, which at last count in 2012 generated nearly $10 billion in the state.

When I took this photo, there was a housing crisis, and workers were camping on public lands, and efforts were launched to find affordable housing. These problems remain. Meanwhile, the debate over immigration and the fate of millions of undocumented workers continues. Here in Washington state, some of the workers will be authorized (they are being brought in from Jamaica, even). Others will be here without authorization. And nearly all of us who eat fruits and vegetables will be continue buying the low-cost produce picked by people why do hard work many U.S. citizens do not wish to do.

For more portrait photographs, please visit my portrait gallery on my web site. (Click on the photograph to see a larger picture on a separate picture page.)