Relatives of mine lived on Stout Street, in northwest Detroit. It was once a middle-class neighborhood for working-class families. Now it has gone to hell. I have profiled the decay on this block before. I wanted to share how it looks with this short video. It still makes me want to cry every time I see it, because every house that used to be here is a story of lives come and now gone.

The footage was taken in September 2015. 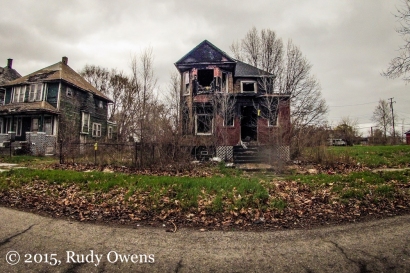 Charlie LeDuff, author of Detroit, An American Autopsy, has provided one of the most painful descriptions of nihilistic self-destruction I have ever read. It is a brutally honest dissection of Detroit. While working as a reporter for the Detroit News, he became close to a company of the city’s beleaguered firefighters, who have battled literally thousands of fires intentionally set by criminal arsonists throughout the metro area. LeDuff shared this comment from one of the firefighters who is asked to do the near impossible–save a city the residents are intentionally burning down.

“In this town, arson is off the hook. Thousands of them a year, bro,” the firefighter told LeDuff. “In Detroit, it’s so fucking poor that a fire is cheaper than a movie. A can of gas is three-fifty, and a movie is eight bucks, and there aren’t any movie theaters left in Detroit so fuck it. They burn the empty house next door and they sit on the fucking porch with a forty, and they’re barbecuing and laughing ‘cause it’s fucking entertainment. It’s unbelievable. And the old lady living next door, she don’t have no insurance, and her house goes up in flames and she’s homeless and another fucking block dies.”

In my entire life, during which I have visited dozens of countries, I have not witnessed anything as bizarre as this. I have seen worse than this, and things vastly more evil than this. But the utter pointlessness of this chaos, besides pure anger and loss of meaning, seem overwhelming. And people live with this, next to his, surrounded by this, engulfed by this. For those of you out there who may snicker and even enjoy this, take heed. LeDuff and many other chroniclers of the downfall of the American middle-class in cities like Detroit have a message for you. Detroit is not the past. Detroit is the future, coming to a place near you, and quicker than you think.

Most of these crime scenes are in what used to be called the Delray neighborhood, near Dearborn and Jefferson, by Zug Island. Hard to imagine that people still make the best of it here. It is home to someone. I often wonder what Canadians just across the Detroit River may have thought seeing flames, if they could see the smoke amid the heavy industry that surrounds this former Hungarian-American enclave. This is now called a “ghost town” within a city.