The mural of Opal Whitely in Cottage Grove was being touched up during my brief visit in early August 2017. 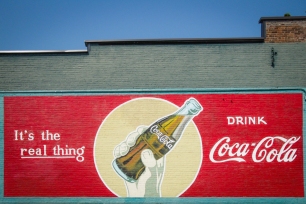 In 1994 and 1995, I worked as a reporter in the small Willamette Valley community of Cottage Grove (pop. 10,000 as of 2017). The city is 20 miles south of Eugene, along the Interstate 5 corridor. When I was working there, the old economy based on timber production and milling was shutting down, and one in five residents was living near the poverty level. In terms of that grim statistic, not much has changed. Today, more than one in five live in poverty, according to the last Census count.

I reported on just about everything in Cottage Grove as a local reporter: crimes, sports, civic life, local government, police, fires, successes, tragedies, inspiring people, pets, redevelopment, land use battles, racism, anti-racism, and more. I loved how I was exposed to all of humanity by simply writing stories about people’s lives.

I paid a visit to Cottage Grove on my way through in early August 2017. I stopped at my old employer, the Cottage Grove Sentinel, and walked through the historic downtown. It is still a beautiful place, with old brick buildings and merchants working to keep civic life and that social place alive.

Some big murals caught my eye. One of the iconic Coca-Cola brand liights up an otherwise dull brick wall. The other celebrates the many covered bridges near Cottage Grove and the celebrated writer and local resident Opal Whitely, painted in 2001 by artists Connie Huston and Howard Tharpe. There are just some of the city’s mural art.

Whitely was born in 1897 and died in 1992. She was a child prodigy, and also schizophrenic. According to a Cottage Grove historian and writer, Stephen Williamson, at the age of 21, she traveled to Boston with her book, The Fairyland Around Us, considered one of the most remarkable blends of science and faith ever written. He writes, “The Atlantic Monthly turned that book down, but did publish her childhood diary. It quickly became a worldwide best seller. Presidents and kings read it. Mothers named their babies after her. Opal was an international star–at least outside Oregon. Opal’s diary describes the life of a lonely child from logging camps in the Cascade Mountains.”

Whitely eventually moved to Europe, where she spoke of abuse growing up and not being related to her family. Eventually her mental illness worsened and she was “committed” to England’s psychiatric system, where she was poorly treated. Says Williamson, “The gifted child genius from Oregon’s wilderness spent nearly fifty years buried in a tiny cell on a crowded asylum ward. In the 1950’s she was given a lobotomy.” She died in the place that imprisoned her for decades.

Today, however, Whitely lives on as one of the main tourist attractions for the community. If you are travelling down I-5, pull off. Travel to the city center. Take a walk. Shop. Eat at a local restaurant and see all of the murals. You can then pause and reflect upon one of Oregon’s most famous daughters who died in a virtual prison, whose only crime was being hyper-creative and afflicted with a mental illness.