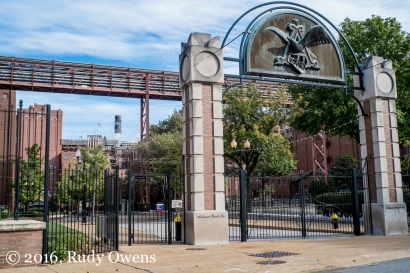 The west entrance to the Anheiser Busch factory displays the iconic Germanic eagle moniker of the King of Beers.

The factory, located near a historic St. Louis neighborhood.

Budweiser as a brand still dominates the local booze market in St. Louis. 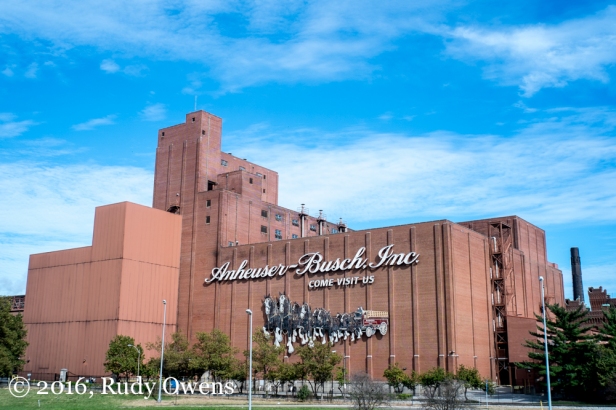 Just another subsidiary to a global conglomerate, and long live the king!

My photographic safaris in my former home town of St. Louis inevitably lead to beer. You cannot tell the story or show the story of St. Louis without focusing on the suds that made the city a world-famous beer epicenter.

As I have published on this blog before, St. Louis became the leading center of American brewing. German-American families became the barons of the new American industry that brought beer to the masses. The Anheuser-Busch dynasty conquered the local market and then the country, producing brands like Budweiser and Busch that were both bland and iconic at the same time.

The Anheuser-Busch complex occupies several city blocks, in the southeast corner of the city, overlooking the mighty Mississippi River. Globalization finally brought the King of Beers to its knees.

Anheuser-Busch became a lowly American subsidiary in 2008 to the Belgium brewing conglomerate InBev, which turned to massive debt financing to acquire the American industrial icon for $52 billion. The sale generated allegations from locals of “traitor” toward billionaire investor Warren Buffet.

The plot thickened in September 2016, when shareholders approved the $104 billion merger of Anheuser-Busch Inbev and SABMiller, another global beer conglomerate, based in London. The announcement was followed by reports of job cuts. The earlier merger had led to nearly 2,000 job cuts in the St. Louis facility between 2011 and 2016, according to local news reports.

Looking at this beautiful industrial facility, sculpted in classic St. Louis brick by great craftsmen, I see a great American business that helped create this city. Now I feel both nostalgia and sadness knowing that this uniquely American corporation has turned into a satellite facility of a company that knows nothing about the city or people who made the brand famous.

Yup, there is a tear in my beer, and I’m crying for you dear.