This is a copy of a photograph I took in 1989, when this still looked like a healthy neighborhood. 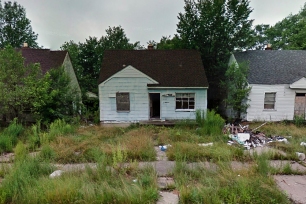 This picture is taken from a Google Maps street view, for the purposes of editorial comment.

My recent visit to Detroit still lingers in my mind, particularly in light of some recent comments I have heard back in Portland. One person said, oh, I heard there are some innovative community gardens there. Such comments, which mean well, reveal a distressingly strong disconnect from the painful reality that still faces hundreds of thousands of residents that is beyond Detroit’s ability alone to fix. Even Mark Binelli, author of the 2012 portrayal of his ancestral home, Detroit City Is the Place to Be, does not hold punches when trying to frame the efforts to revive the city in positive light. “And then there were the ruins,” writes Binnelli of the 90,000 abandoned structures as of 2012. “When it comes to the sheer level of decay, Detroit is a singular place … .”

So it was inevitable I had to look up where my relatives once lived. What I found took the air out of my lungs. This is a home of relatives from my biological family (I am adopted) as it appeared in in 1989, when I took the picture. The home is a tract house on the city’s westside, not far from River Rouge Park. It was an OK looking neighborhood when I stopped to take the photo. I did not, perhaps thankfully, visit it during my trip. I did find the Google Maps street view, which I provide for comparison. The Wayne County Tax Assessor’s office now lists the owner as the Detroit Land Bank Authority, meaning the emptied and gutted structure is in receivership waiting to be sold at auction with thousands of other distressed properties. The value is pegged under $50,000 according to numerous real-estate web site, but I doubt anyone will live here again. It looks dead.

This is hardly anything new for residents. This was a street where working-class couples could buy into the middle-class dream, which is what my relatives did. This was before the ending of redlining that segregated African-Americans from these areas, before integration, and before upheavals of the 1960s. Then they left, as the city began its downward slide, for reasons I still do not know. Racial issues, global trade, outsourced industrial jobs, NAFTA, white flight, and more all had a part to play on this street, not to mention a host of other federal policies that transformed cities like Detroit.

What is troubling for me is to know that a public park and now-closed school are across the street. Lives were lived in this neighborhood. Lives are still lived here. And this home is now a corpse, among many in this once great city. Now when I look at abandoned homes I think of the lives of those who had all their dreams wrapped into them. This just happens to be part of my own family story. I simply want to cry.