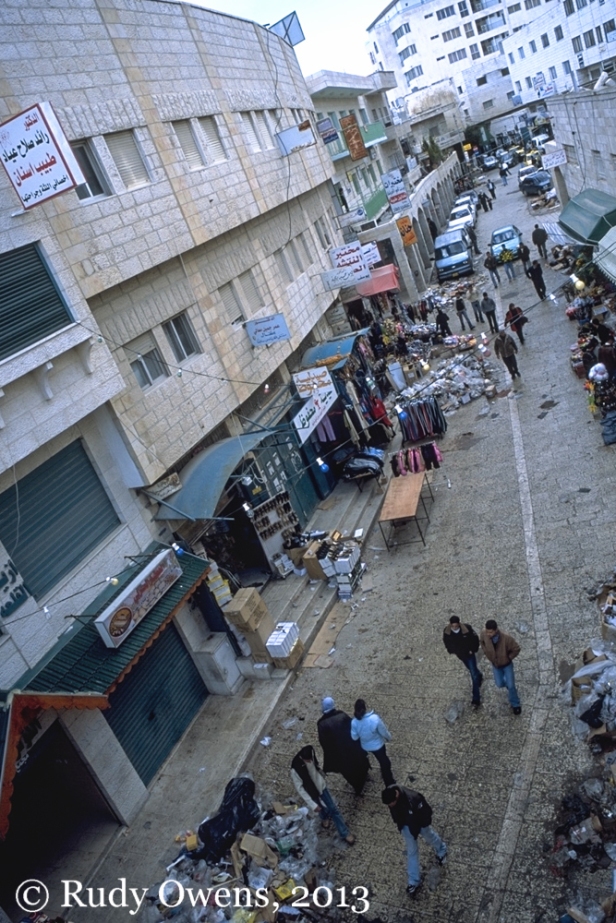 I took this photo of trash-strewn Bethlehem, then under a security lock-down after a fatal bombing in next-door Jerusalem that killed Israeli citizens. The alleged bomber came from Bethlehem.

I visited Israel and the Occupied Territories in February 2004. It was a tense time. There was a terrorist bombing in the Jewish area of Jerusalem, and the Al-Aqsa Intifada was taking place.

Bethlehem, the purported birthplace of Christendom’s name-sake savior, Jesus of Nazareth, was under lock down. I had to walk through the Israeli security perimeter, and there was almost no traffic getting in or out. Security forces almost prevented me from reentering back into Jerusalem.

Tourists were no where to be seen. Tourism businesses were shuttered. A pervasive gloom prevailed. Merchants were pleading with me to buy something, anything, when I came to see the supposed birthplace of Jesus, which is located in a grotto beneath the Church of the Nativity. Trash was everywhere, as the Palestinian Authority had no money or capacity to pick up the garbage. So this is what it looked like on my visit to the holy city we all sing about in carols around the world.

Today, Bethlehem and the West Bank remains isolated by the security perimeter, and tourism that supports many in Bethlehem is still suffering as a result of the last war in Gaza. All is not well in the Holy Land this Christmas season, again.