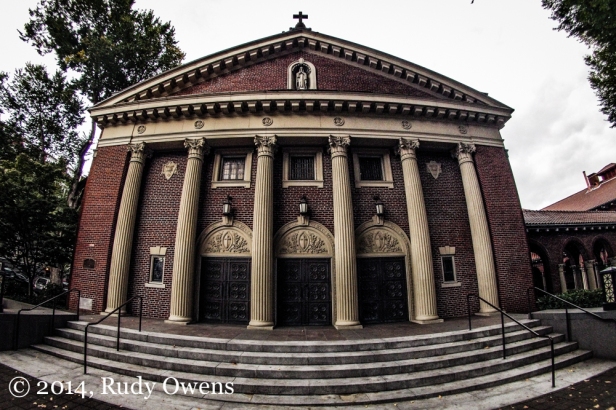 The cathedral is located in Northwest Portland at NW Davis and 17th. (Shot in October 2014.)

Within about five blocks of each other, one can find three of the most exquisitely designed and built religious structures in Portland: the Catholic St. Mary’s Cathedral of the Immaculate Conception, Temple Beth Israel, and Trinity Episcopal Cathedral. St. Mary’s is designed in Romanesque Revival style, similar to churches I have seen in Italy, but also in the United States duplicating those in the Old World. The complex has a large courtyard and ancillary facilities attached. If you are in Northwest Portland, take a stroll to 17th and NW Davis, and you’ll find a beautiful complex taking over a city block.

I shot this photograph with a GoPro camera. To see a larger photograph, click on the picture to open a separate picture page.