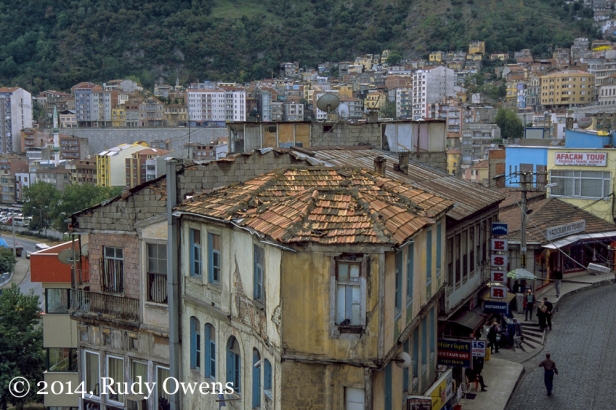 A view from my hotel in Trabzon in 2001. Getting there was a great epic. I arrived at 3 a.m. after a day-long bus ride and found a hotel with nary a scratch. The things we do when we travel. Loved this place.

I visited Trabzon, in northeast Turkey on the Black Sea, during my Turkey trip. It is a fascinating, large city, with Greek, Byzantine, and finally Turkish roots. One of the great Byzantine-era churches, the Hagia Sofia, is now just a shell there, on a hill overlooking the sea and recently converted to a mosque. I used this city as a base to visit the Sumela Monastery, a Greek Orthodox sanctuary in the nearby mountains that was abandoned in the 1920s when Greeks and Turks engaged in a nasty ethnic cleansing of their respective countries that displaced about 2 million people. I may publish some pictures of that monastery later. (Click on the photograph to see a larger picture on a separate picture page.)