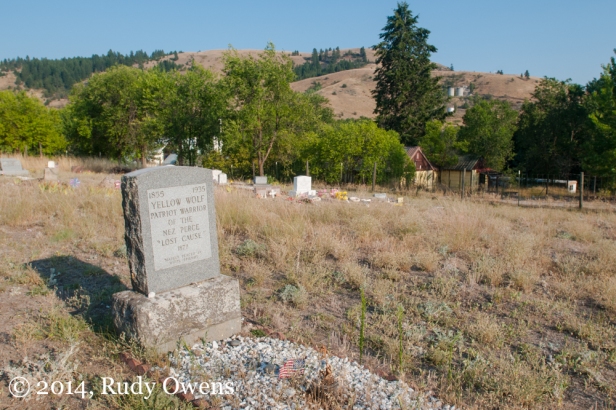 A grave for Nez Perce warrior Yellow Wolf was erected by “white friends” in his honor.

I passed through the Colville Reservation this summer, which encompasses a huge swath of land in the north central part of Washington State. On the way, I stopped at the Nez Perce Cemetery. The Nez Perce are among the 12 confederated tribes who make up the reservation. This is one of the graves in the cemetery. The gravestone reads: “Yellow Wolf / Patriot Warrior of the Nez Perce ‘lost cause’ 1877 / Marker placed by white friends”

The persecution of the Nez Perce led to one of the more sorrowful chapters of the conquest of the American West. In 1877, multiple U.S. Cavalry commanders chased more than 750 Nez Perce men, women, and families for more than 1,000 miles starting in Oregon all the way to the current border with Canada, though not in the lands managed by the Colville Reservation. This event and trail is now recognized as the Nez Perce Trail, commemorated by the U.S. Congress in 1968. In the words of one Nez Perce descendant, Frank B. Andrews: “We the surviving Nez Perces, want to leave our hearts, memories, hallowed presence as a never-ending revelation to the story of the event of 1877.”