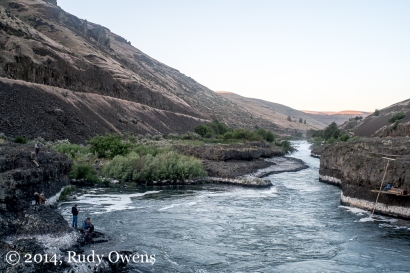 The Deschutes River smashes through a fishing ground managed by the Warm Springs Indian Reservation (2014). 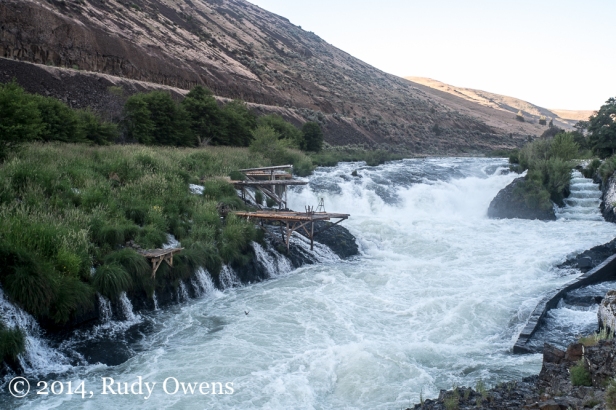 Platforms erected by tribal fishermen line the Deschutes River, at a spot managed by the Confederated Tribes of Warm Springs (2014). When I visited the first week of June 2014, spring Chinook were running.

For those who have never lived in the Northwest or fished, the significance of fishing to the region historically cannot be underestimated. Fishing is a unifying force among many diverse groups, a source of economic development for many small communities, and a cultural and historic legacy for Native Americans.

Fishing rights granted in treaties signed by the U.S. Government with tribes in Oregon and Washington remain in legal force. So-called “fishing wars” and “fish-ins” involved nonviolent and at times near-confrontational encounters among Native fishing activists seeking to reclaim fishing rights granted to them in treaties. These disputes attracted national attention. All of this culminated in the 1974 Boldt Decision that restored those rights in Washington State, and earlier with the Belloni Decision, in 1969, in Oregon. (Click on the Boldt Decision link to get a quick dose on this complex Northwest issue from a paper I wrote a few years back.)

Today, there are fewer fish, mostly salmon, because of decades of hydroelectric dam use on the Columbia River water system and development, but there is also shared management of the fisheries. Sherars Falls, on the Deschutes River, is a historic fishing area managed by the Confederated Tribes of Warm Springs, as provided by treaty rights. I saw lots of tribal fishermen here this week, along with sports fishermen, who pay a daily fee to the tribe. Though developed, with a major railway, power lines, and roads, it is still wild, and the thrashing of Chinook caught on a line is one of the greatest things to experience. And this was really one of the most beautiful places I have visited in a while.

(Click on each photo for a larger picture on a separate picture page.)