Right now, the tunnel project is stuck and engineers are scrambling how to fix a massive and still-broken machine trapped beneath Seattle’s mucky dirt. This is the closest the public can come to seeing the work yard, as seen from Highway 99 (2014).

A long line of trucks usually is found on the service road next to the port and visible from Highway 99 (2014). 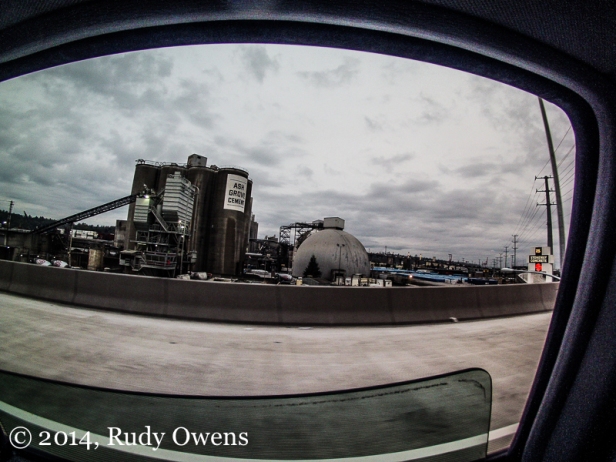 There is something comforting to me about this factory, which continues to churn out cement year after year (2014).

A massive tunnel-boring project in Seattle, that is pegged to cost more than $3 billion, is now on hold. Th several-stories-tall tunnel boring machine, dubbed Bertha, is now broken and stuck beneath the viaduct I drive over every day (Highway 99), and theoretically the future tunnel will replace the aging structure that takes me and tens of thousands of other drivers daily. North of the port, crews are digging up things by the Gates Foundation headquarters, making this a landscape of cranes, heavy moving equipment, and grand ambitions that tower like the Space Needle close by. Looking at the cranes in these pictures, I imagine I am seeing the giant snow walking machines seen in The Empire Strikes Back. My favorite landmark, however, remains the massive Ash Cement Factory. Time has not seemed to change this place. It just seems to get more grey.