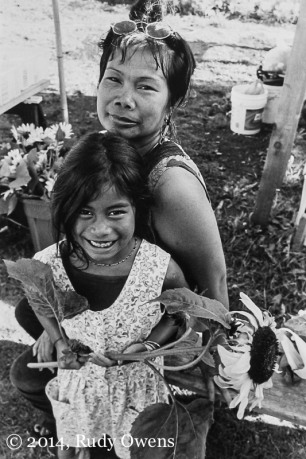 In 2002 I met this mother and daughter at the old community garden in High Point, before it was remodeled, as part of my Community Support Agriculture documentary project that I completed shortly after. This is one of my favorite portraits of a mother and daughter I have.

For my documentary project on Community Supported Agriculture in public housing projects in Seattle, I collaborated with Bunly, who did wonders working with many immigrant families building and sustaining community gardens. Dentists love this picture, by the way, and so do I.

In 2003 I worked on a documentary photography project on Community Supported Agriculture in Seattle. This work culminated in a show I exhibited in Portland, Ore., which highlighted gardens and gardening at two different mixed-income communities. These gardeners were all public housing residents, including immigrant families. I also showed these two photos in a show I did in Anchorage in 2006 at the Snow City Cafe called Being Themselves.