Oregon’s winter surfing season has arrived. That means one often puts on a wetsuit when it is below freezing outside and enters the cold Pacific Ocean when most people are bundled up in mittens and hats.

That never stops Oregon surfers, at least at Seaside.

Despite a persistent shoulder injury, I made three trips this month.  I need to hold off on future outings for a while until this stubborn problem is healed.

I took these shots on Dec. 23 and 31, 2017. Both were exceptionally mild days at this popular surfing spot. I counted more than 40 surfers in the waves both times.

I love that this crew of men and women are not fazed by the cold. All one needs is the right attitude, the right wetsuit (at least a 5/4/3 or 5/4), booties, and gloves. The rest is up to the pure, divine energy pumping in from the ocean’s depth to the sands of Oregon.

I hope everyone finds the right wave in 2018 and shares the stoke, no matter where they are. 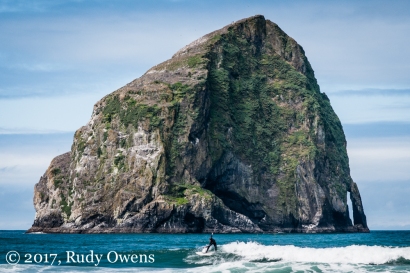 On a beautiful day in May 2017, the early morning crew were nailing it at Cape Kiwanda in Pacific City.

On a stormy day at Seaside, the A-Tem were nailing tough overheads.

On a day with many whales breaching, the Seaside surfers were catching some sloppy waves as the day turned windy in mid-September 2017.

Port Orford offers a lovely cover for surfing, but not during my visit in August 2017. 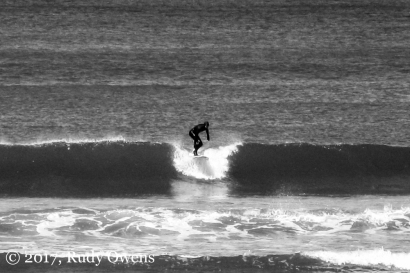 A spring surfer nailing it at Seaside

Hunter’s Cover in southern Oregon is a beautiful surfing destination.

A year ago this weekend, I became an Oregon surfer. I now feel confident enough to be in the lineup with every other surfer who shares my passion.

In September 2016, I bought a beginner board, the right wet suit, and other gear, and I began the long journey of mastering the art and sport of surfing by travelling from Portland to nearly all surfing spots on the Oregon Coast and even California and Washington.

The journey far exceeded all of my expectations.

I learned how to understand surf forecasting and paid close attention to the storm systems in the Pacific Ocean that control the weather from Alaska all the way down to the tip of Tierra del Fuego. I met people who shared my passion for the ocean and this highly alluring sport. Many of them have lived and surfed all over the world and country, and we all speak the language of surfing. Some are visitors, and others are residents who now call Oregon home. We all come together in the water, waiting for the wave, patiently sitting on our boards and scanning out for the next set rolling in.

I have learned how to read waves and practice the craft of positioning myself at the right place at the right time. In Oregon’s tough, stormy waters, this involves punching through feisty breaks that pound you as you try to reach to lineup in the water, where the waves give you that window of opportunity to tap their energy and capture moments of transcendence.

I have surfed during snowfalls and blinding rainstorms.

I have seen sea otters, harbor seals, humpback whales, and signs warning me of great white sharks that are common in these waters.

I have made new friends who love to wake up at crazy morning hours and meet at the ocean, just to capture the magic of the ocean in the morning, as the smell of saltwater fills your nostrils and the sound of the wares creates a feeling of calm in morning’s first light.

I have also learned how to ride waves during this time. When I started, I could barely get any. Now, when I go out, I can catch sometimes 20 or 30 rides, if the conditions are perfect or near perfect. Even on bad days, I am mastering the art of riding our very common cheeky waves. These can be fun.

Yesterday, on Sept. 16, 2017, I rode perhaps one of the best waves of my life. I started in the lineup at Seaside, near the rocky shore, and grabbed an overhead that took me almost 100 yards to the beach, riding its face and seeing the translucent water carry me on a pulse of energy. My grin grew wider with every second I was steering my 9-foot Stewart longboard.

Now, a year into this journey, I capture each outing with a surf diary, describing the ocean color and smells, currents, sets, wave patterns, colorful characters, my memorable experiences with wildlife and aquatic life, and my memories of the day. As a lifelong writer and journal writer, I can say this is perhaps the funnest journal I have ever kept.

The sets began coming in more powerfully as the morning unfolded at Seaside, Oregon, on May 12, 2017.

The waves were well over seven feet and some of the sets were ripping as the surfers began paddling out to the line up to wait for the right wave on May 12, 2017.

As a novice surfer, I still realize how little I know about the power of the ocean, particularly rip tides. Today, they felt like monsters pulling out from shore as the tide shifted and quickly changed between ebb and flow, and the water was sucked out of the main surfing cove at Seaside with alarming speed and force. I am breaking many rules still. I am not riding the rip out to the line up location. My dives are lousy, which is why I am not surfing near others. Also, I am choosing the wrong spots, because I do not trust my “fun board” in the rip.

Today I decided I will upgrade to larger board and start venturing out the best point at this beach, where most of the surfers sit, looking longingly to the west, waiting for their wave to roll in from the ocean and to the shore. Today’s morning crew understood the tide better than me and put in as I was leaving. My consolation prize, besides getting a few good rides, was seeing the morning light as it danced through the dark clouds and turned the ocean a translucent green. It was magical to be the only soul out there for a while.