I finally made it out to Otter Rock, one of Oregon’s premier surfing beaches. The spot is located next to a state park, where you can also find Devil’s Punch Bowl. It’s a great place to appreciate the beauty and ruggedness of the Oregon coast.

Well, surfing here in the Northwest is never perfect, and Otter Rock like all beaches must contend with the swells and winds of winter. When I headed out on Feb. 17, 2017, the forecast called for not-so-windy weather and swells spaced apart at least 15 seconds. It proved far windier and rougher than I had bargained for.

Was that going to stop me? Heck no. I put on the suit and got out. I did get my requisite rides, plus many shorter rides closer to shore. Not a perfect day, but when you spend four hours in the waves, do you have anything to complain about? Absolutely not. A day later I still feel the vibe. 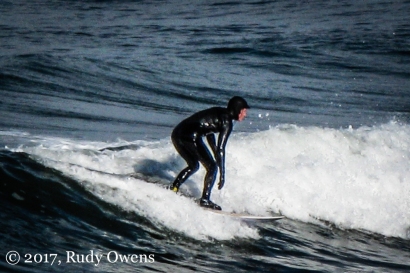 Riding the current out from the cove. 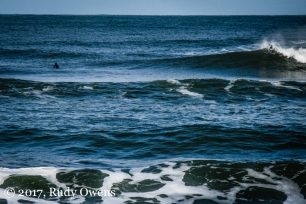 I have not had time lately to go out and take new images. So I simply shoot a few memory shots whenever I head to Seaside, to  work on my surfing skills. Today was tough. The waves came in about every 9 to 12 seconds, and they were at least 5 to 6 feet high. I should have waited til midday, when the sets would space out to every 20 seconds and the wind had calmed down. So that is my lesson learned. I have learned something every time I surf, which is why I like this sport. Also, don’t go out in the chop.

Unlike most of the region, I was able to see the moon over the ocean, which was lovely. I also played hide and seek with a juvenile harbor seal. It watched me as it bobbed in and out of the waves and as I struggled to find a spot to find a wave. I envied its flippers.

In the end, I caught my requisite waves, including a divine pulse of energy that brought me from a far break to the shore. Love that. I met some nice surfers, as always. One guy grew up in Santa Cruz, had lived in Maui, and now calls Portland home. For him, this has to be rough going from perfection to imperfection. For me, it’s what I know, and what I love.

As for taking fine art pictures and telling compelling photojournalistic stories? I will eventually get back into that, as soon as I get my forthcoming book published. There is only so much time in the week, and I do have a thing called a job that takes up time. 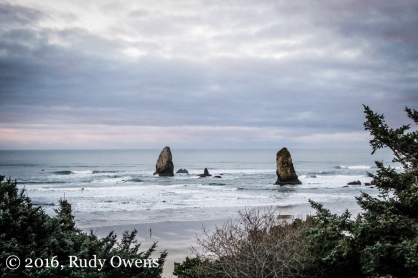 Today, I surfed at a location called the Needles, located at Cannon Beach. This upscale coastal community is about 85 miles northwest of Portland. Most of the miles-long beach is un-surfable, offering no coves. Rock formations at the Needles offer some slightly more stable sets, but not by much.

Let’s be clear. It’s rough, Northwest chop. You have to get hammered by constant waves to get to the point where they break. Today, the forecast predicted calmer waves before 10 a.m., then wind. Except for the first 30 minutes after I arrived around 8 a.m., it was all chop. That did not stop me. I donned my 5/4/3 wetsuit in 28 F temperatures and headed out with a grin.

I had a lovely time. I actually caught some nice rides, riding the foam crests. I had upped my skills to a new plateau–I finally felt I had mastered a few basic moves to give me a decent ride with all of the waves I caught. Best of all, I entertained onlookers with my mediocre abilities. I don’t think they realized how warm I was in my seal suit. I hope they were amused and considered trying surfing themselves later.

I had wanted to surf here for more than 33 years, since the first time I came as a college student. I finally did it. It was a great way to end the year. All that was bad was rinsed off my skin and cleaned from my spirit. I again felt renewed and ready for the challenges that await in 2017. There will be many–and today I will not think of them.

Have a happy New Year and a peaceful and prosperous 2017, everyone. 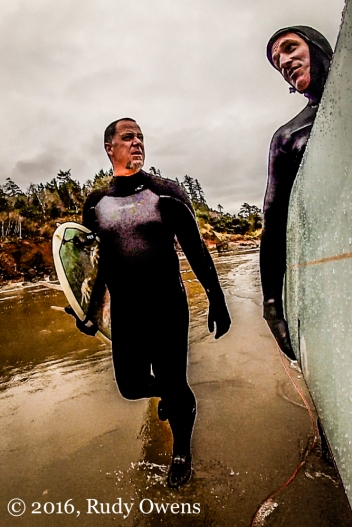 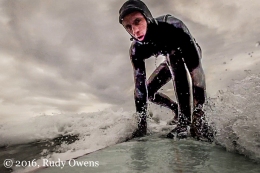 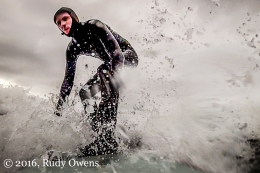 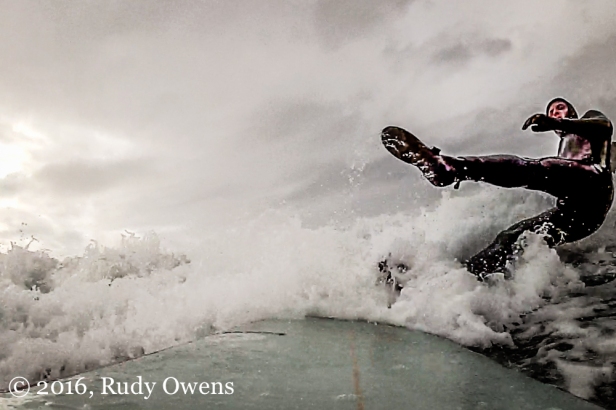 (Click on each photo to open a larger picture on a separate picture page.)

I own a GoPro Hero3, and I love it. It was inevitable I had to buy the GoPro surfboard mount once I owned a surfboard. Last weekend I tried it out when I went to “shark attack” beach, otherwise know as Indian Beach, in Ecola State Park. I went with my surfing Sensei, Sean, who has slowly introduced me to this wonderful sport. Aside from likely cracking one or more ribs, it was a fabulous day (that injury really blew a hole in vacation I just cancelled).

The videos I took have that hilarious GoPro quality of chaos. The board is being tossed around as waves hit, I’m going under foam, the camera goes underwater and blacks out. Most of the time I filmed myself holding on the the board trying to avoid junk waves, because it was a lousy day. I did capture some fun short foam wave rides. I also laughed at how my face scrunched up as a I paddled to get the wave. So I have a lot of B-roll junk video that is very awful. I won’t share that. However, I was able to extract some fun images that only a GoPro can capture with a fisheye lens view, showing the beauty of the moment when waves and water engulf you. It is one reason why I love GoPros. They tell stories beautifully, and I love to tell stories with them.

I played with some settings in post-production and produced these photos. They have a painterly quality I like. This is so much better than another GoPro surf video.

I also was inspired by some hilarious mockumentary videos of GoPro surfing fetishism in southern California. I laughed a lot watching these, because I had captured all of these scenes, minus extreme surfing localism that permeates surf culture globally. This one shows localism gone awry to the Game of Thrones soundtrack (LOL) and this one how many surfers tell their stories to the world, when they really are not that great. Both are published by The Inertia. GoPros used right can also create lovely works of beauty, which also show just how wild dropping-in can be when surfing etiquette gets tossed, often leading to confrontations at the beach. It is all part of the sport, and you have to live with it and accept it.

One type of great day happens when you pursue your passions and let your worries slip away. For me, this happens easiest when I connect with nature and tune out the crazy world.

Yesterday, Sept. 16, 2016, I had one of those classic “great days.” The weather was warm, Indian summer style. The sunrise over the farms of Washington County generated warm, William Turner-esque light.

A good surfing day begins with rising in darkness and knowing amazing waves and the smell of the ocean await you.

The winds were mild and the surf was gentle (two- to five-foot swells) at the Oregon Coast. Indian Beach in Ecoloa State Park offered amazingly clean sets that rolled in sweetly from the Pacific Ocean. I managed to get a few more rides–slowly I am building my skills and confidence. I felt that amazing serenity that only comes with being in the ocean, smelling and tasting the salt, and feeling the power of nature as I bob like a tiny bubble. Everyone surfing that day smiled and was in a good mood. I made some nice personal connections with people who gave me some tips about the surf.

Ecola State Park was as breathtaking as ever with its moss-covered semi-rain forest and coastal views. I had an absolutely perfect run after my surf at Cannon Beach. The dogs made me smile immensely. I seemed to pick up steam on the last three miles and felt stronger than I have in weeks. The 20 oz. IPA from Gigantic Brewing Company in Portland tasted better than ever. And my ratatouille tasted divine. Yeah, what a great day!

Oswald West State Park is a popular surfing beach in northwest Oregon, south of the more upscale and popular Canon Beach. You will need a wet suit, as we are talking water that is always less than 60 F. The day I visited (Nov. 9, 2014), I saw a lot of novices and not a single clean ride. The ocean was choppy and the surf erratic. No one seemed to mind. Everyone was enjoying the vibe. You can see a bigger version of the video here.