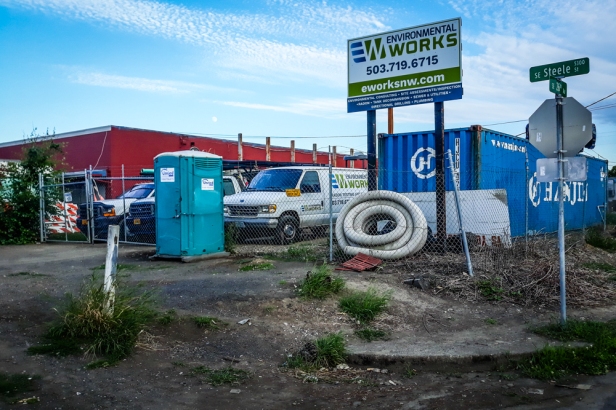 (Click on the image see a larger picture on a separate picture page.)

I took this shot with my Samsung smartphone, which has a mediocre lens, even for cellphones. Even then, it can occasionally capture something special.

This location is at the corner of SE 26th Avenue and SE Steel Street, in sourtheast Portland, Oregon. I used to bike by here decades earlier, when I attended college a few blocks away. Despite Portland’s massive gentrification, some neighborhoods outside of the Port of Portland still have the blue-collar industries that used to dominate the economy not long ago.

My first memory of Portalnd was of that time, and I loved its grittiness when I first came here. That seems long gone now.

A sunny day makes the Cuyahoga look almost scenic; to the left the Terminal Tower.

Taken from Bell Isle, during a fall rain storm.

Detroit and Cleveland, once proud Midwest cities that defined America’s economic might, now symbolize what has become of America’s industrial economy. Both cities have lost residents by the tens of thousands (in Detroit’s case by more than 1 million residents in five decades). They have seen industrial production shift overseas, and now are struggling to define themselves in the new American economy. Wonks label cities such as these as part of the “rust belt,” in part to diminish what industrial production meant and means to America’s overall economic health.

The jobs that once accompanied heavy manufacturing are not coming back. There is still a lot of heavy industry in both cities, including steel plants and in Detroit’s case, automobile assembly and manufacturing, among many others. But the future is likely more tied to firms like Quicken Loans, owned by billionaire Dan Gilbert, who has properties in both cities and sees declining Detroit as a bargain for real-estate acquisition. (He recently raised hundreds of millions in junk bonds for his Detroit property schemes.)

I also have ties to both cities through my adoptive and biological families. I was born in the Motor City. I spent a fair bit of time in Cleveland over the years because of my adoptive father’s family ties.

Here is how the two former majestic American metropolises look today, in a way they would like the country to perceive them: strong, modern and proud. But behind that facade, there is a lot of struggle, felt by the people trying to re-invent their lives in the “new economy.”