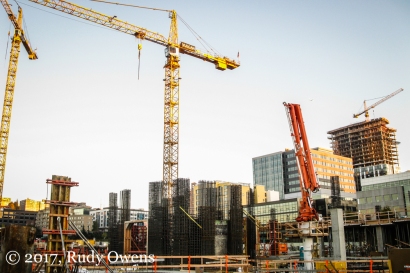 Amazon is continually expanding its holdings in South Lake Union. Seattle is now a company town, thanks to Amazon, according to one Seattle Times story from September 2017.

The skyline looking south from Lake Union is dotted with construction cranes. 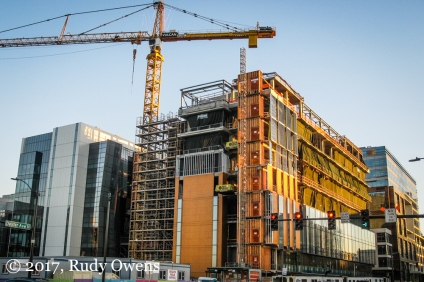 The University of Washington is expanding its UW Med Center in the South Lake Union area. 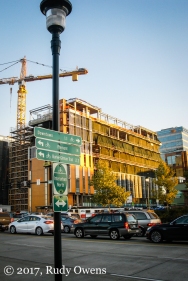 Amid the towers of glass and steel, a visitor can find his or her way with this route finder.

I just visited Seattle for the first time in about a year, and I came away disoriented by the massive developments underway on the south end of Lake Union.

If you are not familiar with this location, Amazon.com has its world headquarters located here, without any identifiable corporate identifier telling you that you are in the center of its global and growing empire. Multi-billionaire, real-estate mogul, and Microsoft Corp. co-founder Paul Allen was the big bucks developer who brought his personal vision of a techie, corporate Seattle to this once under-developed area of warehouses and retail.

My alma mater, the University of Washington, itself a corporate institution that is focused on real-estate acquisition and business partnerships, has developed the UW at South Lake Union complex here to promote biotechnology and medical research, with a vision of developing profitable revenue streams. One of its new buildings is well under construction too, as seen in the photo essay.

I left Seattle in 2014. Since that time, construction has taken off even more intensely in this area. The success of Amazon has also fueled the city’s runaway and skyrocketing housing costs. These also have driven many lower-income and now middle-income residents outside of the city, which some say is a larger reflection of growing income inequality. That is one reason I left.

The Stranger, the city’s alternative weekly, noted in April 2017 that the tech bubble is not the only driver—out-of-state and out-of-country investors, including hedge fund dollars and Chinese-source foreign capital, are helping to fuel real-estate speculation. “We do know that 38 [percent] of purchases in Seattle real estate are done with cash, which is a red flag suggesting something is out of whack,” reports The Stranger.

However, Amazon is having an outsized role in the rapid changes underway. In its Aug. 23, 2017 piece, “Thanks to Amazon, Seattle is now America’s biggest company town,” the Seattle Times described Amazon’s role in Seattle this way: “Amazon so dominates Seattle that it has as much office space as the city’s next 40 biggest employers combined. And the growth continues: Amazon’s Seattle footprint of 8.1 million square feet is expected to soar to more than 12 million square feet within five years.” 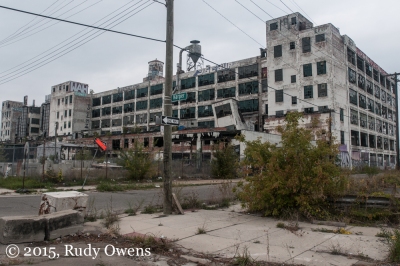 The once state of the art Fisher Auto Body Plant in Detroit is now a crumbling ruin.

Seeing the multiple building cranes and stacks of bland, new office towers in the South Lake Union area reminded me of the golden age of Detroit, my home city. Motown is now the poster child for urban failure in the minds of many planners in the United States and even internationally. From a peak population of nearly 1.8 million in 1950 and once the epicenter of the nation’s manufacturing sector, it entered into a long downward spiral in the 1960s and never recovered. It is now a shell of its former greatness, struggling to reinvent itself in a post-industrial, post-NAFTA world.

So, Seattle, plan well and know the party cannot last forever. All great things reach an apogee. Some great beacons of power and commerce collapse quickly, and others slowly. Rome or Beijing or Istanbul may be eternal cities, but their mighty and powerful empires came and went.

(Note from Author: Yes, the title of this article is a play on words from the Bible, from Jeremiah; I could not resist, and I am not a member of any religious denomination.) 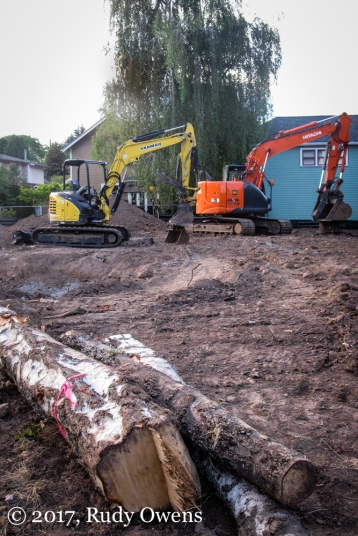 A home was recently removed, with all of the trees, making way for new construction, in tony Sellwood. 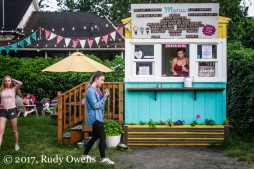 Atlas Scoops, on an empty lot on my street, is one of the most popular hangout spots in the area. 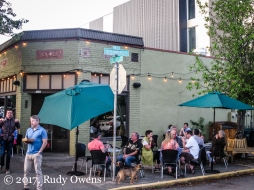 The A Cena Restaurant now has a new development in its backyard, in Sellwood. 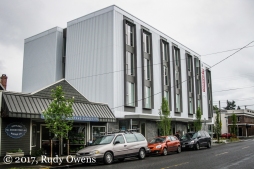 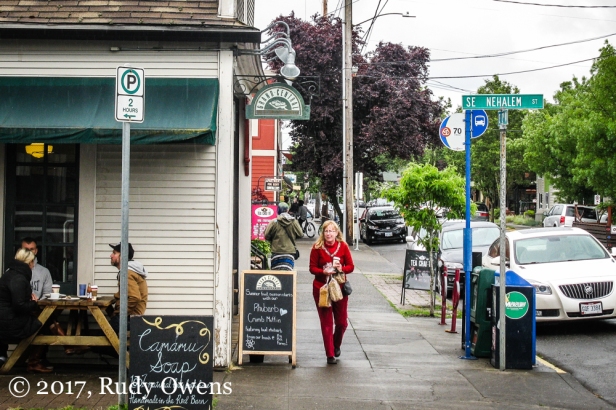 I love having this bakery a short hop from my house. Who wouldn’t?

I live in the tony neighborhood of Sellwood, in southeast Portland. It is one of the whitest and most upper-middle-class areas I have ever lived in. Overall, I really like it here because of the many amenities I can stroll to by foot.

It is a safe place with an amazing walkability score, if you are into real-estate speculation. I love the local eateries, the nearby public library outlet, the pubs, the winery, the bakery, the New Seasons food store, the Wednesday farmers market, and access to the Springwater bike corridor that connects with north and east Portland.

So why the heck wouldn’t everyone want to live here, if they could afford homes at $750,000 or more? Why wouldn’t developers consider tearing down existing homes and rebuilding massive mega-houses, condos, and new apartments given the logic of real-estate development and the construction industry? 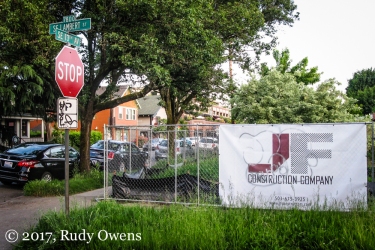 In the past month it startled me how quickly a house can be torn down, trees cut, and land leveled for some medium and higher density projects. In some cases there are just McMansions that are testaments to the pure gluttony of excessive wealth, and we have those in this area. More are surely coming.

A lot of commercial building activity is taking place, in areas zoned for that. But the demolishing of a home is always jarring. The promotion of higher density development in the inner urban areas of Portland like Sellwood have also spurred a housing and rental crisis that saw Portland’s rent rise at the fastest rate in the country in 2016.

There is an active, homeowner-driven backlash against higher density, often pitting middle- and upper-middle class homeowners against each other in some areas near me, notably the upscale Eastmoreland neighborhood, while other areas like my neighborhood are seeing the impacts of higher density during the past three years.

I overall support higher density, but I am deeply worried very little affordable rental housing stock is being built, further limiting the ability of lower-income and middle-income renters to enjoy what may soon be off-limits to many.

In the November 2016 election, city voters by a strong margin approved a $258 million bond to build more affordable housing, but it is not clear how those dollars will be spent long-term. 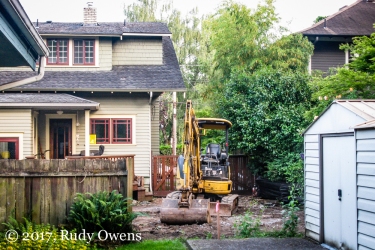 Just this week, Oregonian reported, “Renters, stretched financially and pushed geographically toward Portland’s outskirts and suburbs, loudly demanded solutions—joined in some cases by powerful business interests who saw the issue as a threat to the city’s otherwise growing economy.”

The paper said a typical two-bedroom apartment is now out of reach for most residents. Those are people very similar to me. The paper further noted, “The city’s concentration of struggling renters has only grown. Rents have climbed 30 percent since 2012.”

Meanwhile the bulldozers are clearing a few lots, and I can bet that most of the coming replacement units are not meant for those in my income bracket. 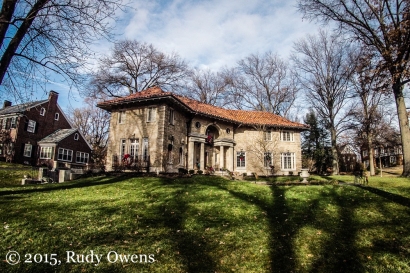 I grew up in University City, Mo., a municipality next to St. Louis. It is a diverse community with a rich cultural and architectural history. It remains a racially diverse community with an incredible diversity of wealth, but has remained cohesive unlike other communities where the gap between the haves and haves not continues to widen because of growing and historic income inequality in the United States. The swankiest subdivision in this town is University City Hills, located on the south edge of the city next to much more affluent Clayton, Mo., a mini-financial hub for the St. Louis area. Homes date from the first half of the 20th century and span a wide variety of European styles. It exudes money and power, even though it is quaint as moneyed neighborhoods go.

Growing up in areas far less affluent than University City Hills, I always knew a giant gulf separated me and the kids who lived here. Many of them are the type of kids who went to the best private schools, whose parents were professional and upper-middle-class, and who had better opportunities and health then the less well-off in my community. Yes, many of the kids who grew up here went to my public high school, which was a bit rough and tumble, but many more went to private schools and never experienced the world just outside their leafy suburb. One of my college classmates grew up in one of these homes. We had absolutely nothing in common, and I do not think he ever had to worry about college loans, not doing holiday ski trips, and even thinking about what a security net means to success. He was a lot like many young people I knew at my private college.

I still love how pretty the homes are in University City Hills. I know many of the people who live here are likely good people. But they still remain in a place that is worlds apart from the lower-income areas about two miles north. However because these homes are in St. Louis, prices are ridiculously low compared to, say where I have lived, in Seattle. A three-story brick beauty here is actually less than a single story wood shack in parts of Seattle.