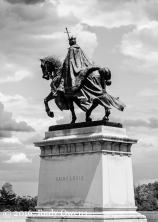 Scene above: The world-famous King St. Louis IX statue on Art Hill in Forest Park, Sts. Peter and Paul Church, St. Anthony of Padua Church. Click on each picture to see a larger photo on a separate picture page.

St. Louis’ namesake comes from French King Louis IX, one of France’s few pious rulers who ruled in the 13th century and died in 1270. The city’s European origins can be traced to French traders on the Mississippi River. One, Pierre LaClede, gave the trading post its name after the revered ruler 252 years ago. That name stuck, and the city of St. Louis was born (on ground inhabited for thousands of years by Native Americans).

The city’s name also helped to attract many Catholic European immigrants, from Italians to Germans to Irish. Many of the city’s strongest and most powerful education and social institutions, from hospitals to orphanages to private schools to St. Louis University, were also founded by Catholics. The Archdiocese of St. Louis virtually runs the city’s homelessness programs and non-profit social service sector.

For a visitor to St. Louis, one of first things one sees are brilliant and beautiful church spires rising tall above old neighborhoods. These institutions still play a vital role in many depressed areas of the fading, formerly great industrial city. Every time I visit my family in neighboring University City, I always take a tour and rediscover this amazing legacy. I still am dazzled by the skill and confidence with which St. Louis’ earlier residents built their community purposefully, to live up to the city’s name.