While driving in east Detroit, near the long-abandoned Packard Plant, I stumbled on another abandoned building, the recently shuttered Crockett Technical High School, originally known as the John Burroughs Intermediate School. It sits on the corner St. Cyril and Georgia Street. As recently as 2011-12, it was a functioning high school. Then, it was closed, and within less than three years, a perfectly fine and even upgraded school, dating from 1925, was left the scrappers and vandals and plundered beyond any reasonable repair.

In 2012, amid Detroit’s fiscal woes, the Detroit Public Schools (DPS) announced a round of massive school closures, carried out by DPS emergency manager Roy Roberts. All told, 16 schools building closed permanently. The Detroit Free Press reported that the DPS had lost about 100,000 students in the past decade, and 2012-13 enrollment was expected to be about a third of what it was a decade earlier. 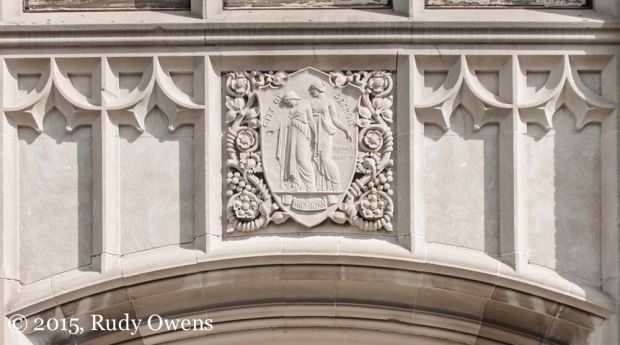 Seal of the City of Detroit on the School Entrance

As recently at 2011-12, the Detroit Public Schools released an annual report on Crockett, noting, “Crockett High School made adequate yearly progress (AYP) in the tested subjects (mathematics, reading, science).” The same report noted, “Parents and community members are an integral part of the school program at Crockett High School. Parents and community members are included in decision making at the school levels through their involvement on committees and special programs. The Local School Community Organization (L.S.C.O.), provides programming for parents/guardians and the entire community.”

Another high school, Finney, also was slated to closed, and students from there and Crockett were to be sent to a new $46.5-million East English Village Preparatory Academy being constructed on the former Finney site. Meanwhile, the DPS allowed Crockett to fall into total disarray and be gutted and destroyed by scrappers.

I spoke to two guys working on a car across the street from Crockett, who told me this story. They noted that the DPS police did nothing to stop the scrappers once the schools alarm system failed. First the scrappers busted the windows and ripped out the metal. Then they went to work on the interior. One of the men, who said he had lived on that corner much of his life, said he even tried to follow the criminal scrapper and his accomplice once. His calls went unanswered by the school district, he said, and the scrappers did their destruction mostly at night.

I casually walked around the school. It was easy to enter it. I jumped in a window. I couldn’t believe what I saw. Perfectly good school furniture was left to rot in the elements. Science labs were ripped apart. The structure of the building, however, looked perfectly sound, appearing better than public schools I attended growing up and have seen elsewhere in the country. The neighbors I met with said the school had even been recently fitted with high-speed internet connections to promote a science and technology curriculum.

It reminded me eerily of the film Children of Men, in a future world where humans are sterile and are unable to reproduce, and schools are left to rot without children to fill them. Crockett was one of the saddest things I saw in Detroit. In nearly any other major American city, such a situation would provoke outrage and activism. Here, no one seemed to care. Meanwhile, the DPS–whose motto is “see it, believe it”–is looking for a buyer for a school it decided it could not even protect. And another piece of Detroit slides into decay, without much fanfare to accompany the fall.