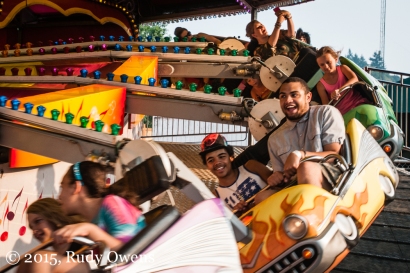 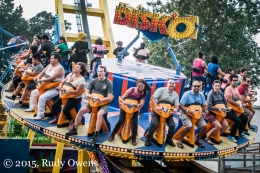 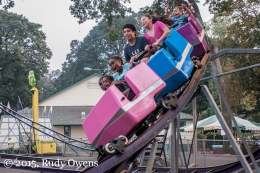 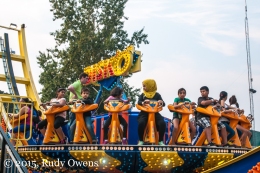 I visited the Oaks Amusement Park this weekend, in southeast Portland, along the Willamette River. This 110-year-old facility is a classic, old-style small amusement park, not a corporate-themed fantasy land that milks consumers for all they got. It is among the oldest in the country. Old-school amusement parks are part of an older, carnival world that dates back to the Midways and Pikes of the 1893 and 1904 World’s Fairs in Chicago and St. Louis. In fact, Oaks Park is part of that tradition, opening as part of the 1905 Portland World’s Fair.

There is something utterly low-brow about businesses like these. No one who attends the opera would be found anywhere near here. The rides are not forcing us to buy Disney products or watch a Universal Pictures film. Most are just about flinging our bodies in different directions, so we can momentarily feel a sense of safely packaged fear and excitement, with a slight twinge of panic these old contraptions might break down and fling us to oblivion.

What I saw at Oaks Park also was about the most diverse crowed I have seen in one place in Portland since arriving. Parents and their kids, and also grandparents, were letting it rip, laughing, and having a good time. The carnie atmosphere prevailed on the main strip, complete with gun-skills galleries, basketball tosses, junk food, and stuffed toys. I thought about the people who worked here and what they thought about their daily grind, and the people who spend their hard-earned money just to escape from life for an hour or two without going broke.

Surprisingly, amusement parks are almost always portrayed as sinister places in film, from West World to Jurassic Park, to even older films like the noir classic Third Man with Orson Welles and Joseph Cotten. This American Life did a pretty good episode on amusement parks also. It is worth a listen too. So amid that joy, and it was joy, you always feel that sense of trepidation, like maybe, just maybe, the rides might not work. And maybe, that is why people keep coming back, year after year.