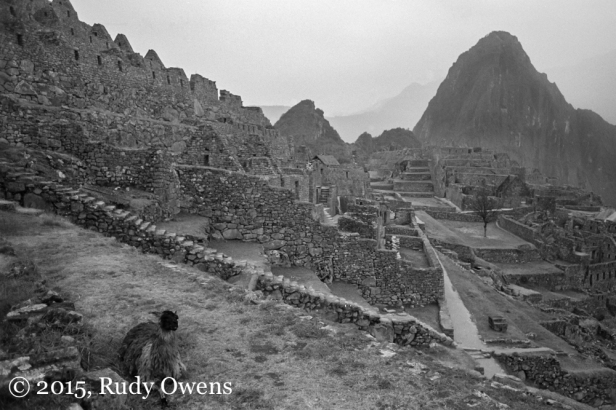 Yes, Machu Picchu, with a llama munching on grass, is a complete photographic cliché. I do not care. I snapped this photograph in the very very early morning hours at this great Inca hill city in late August 1995. I hiked the Machu Picchu Trail to get here, passing six ruins. It was a highlight of my life, mainly because of the incredible mountain topography, the historic footprint of the now-gone Inca culture, and the fulfillment of a dream of mine to mix my passions for mountains, long-distance trekking, and archaeology-history. The negative for this photo was damaged by the developer, as I made a big mistake entrusting my film to a shop in Santiago. But with a little Adobe magic, it turned out OK.

When I arrived at Machu Picchu, it was smoked out from fires on the Amazon basin, where farmers and cattle owners were burning land. I had camped out at Intipunku (Sun Gate), which looks down on the ruins from a nearby pass. That was not, ahem, entirely allowable, but I practiced low-impact camping and had zero impact. And I know my footprint was radically less than the organized tours, some of whom were leaving trash at camp sites. I am now glad the trail is more regulated. There simply is no other way with such a globally popular destination.