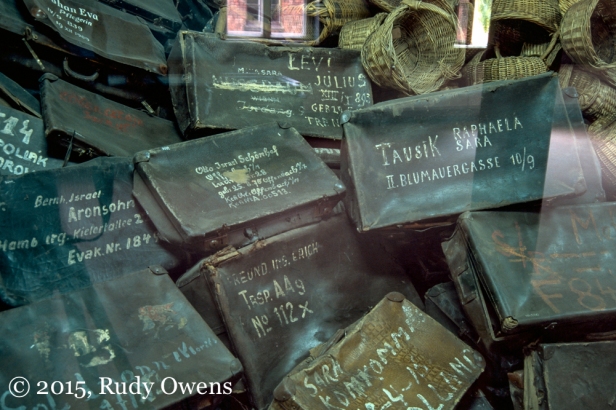 Today I wanted to show a picture that for me demonstrates why I believe that war is not an answer. It is during war when the worst happens. It is under the cover and guise of war, when “things” go wrong. It is in the name of patriotism and country or religion and ethnicity, when humans can operate outside the bounds of civilization. The death camp of Auschwitz, near Krakow, Poland, is a good place to contemplate why peace matters.

I visited here in July 2000, working on a project documenting sites related to Nazi crimes committed during World War II, when the world was truly at war. These exhibits, at the main camp of Auschwitz (Auschwitz 1), were extremely hard. These are suitcases of likely Jewish prisoners who were murdered here. They were stacked as a display, behind a glass case.

You can see more of my documentary work on German camps on my web site.

Click on the photograph to see a larger picture on a separate picture page.