Shot with a GoPro at the Port of Vancouver.

This is the largest grain elevator on complex on the West Coast.

Shot with a GoPro 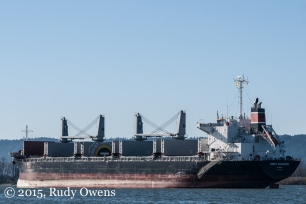 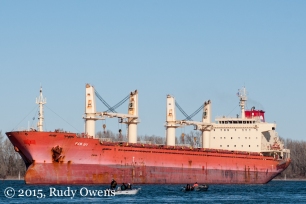 This ship will soon be filled with grain for markets in Asia.

Vancouver, Wash., is home to the United Grain Corp.’s export terminal. According to the company, the grain elevator complex is the largest grain elevator on the West Coast. This is a massive facility. The complex dominates the landscape on the banks of the Columbia River north of Portland. Cargo ships will line up on the Columbia River and basically park in the river until there is a berth for at the terminal or across the river at the Port of Portland’s export terminal on the Willamette River. Wheat grown in western Washington is one of the main exports, mainly for global markets.

I took the photos of the anchored cargo vessels from Frenchman’s Bar Park, in Clark County, just north of Vancouver. It is a beautiful spot to see how the global commodities market works–one ship and one train at a time.