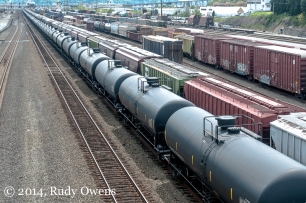 The expansion of oil production in North Dakota’s Bakken oil fields is also pushing petroleum to Northwest refineries and planned refineries, including in Anacortes and further north in Whatcom County at Cherry Point. Seattle, a major rail hub of the BNSF Railway Co., already has long lines of trains carrying petroleum and other products like ethanol. Some Washington state politicians and activists have expressed concern, in light of oil train derailments and fatal explosions in  the last two years in Lac Megantic, Quebec, and Casselton, N.D. BNSF reports that about 1.5 trains carrying more than 90 cars, each capable of carrying 30,000 gallons of unrefined, light crude oil, pass through the Pacific Northwest every day. I have seen them in a rail yard about 1.5 miles from my house, in a spot called Interbay. One thing I also know, this country and this region’s appetite for petroleum shows no sign of slowing down, and the state is looking to expand its refining capacity. Expect big fights in the months and years ahead among the competing interest groups. (Click on the images for a larger picture on a separate picture page.)