I visited Kotzebue, Alaska, just north of the Arctic Circle, in 2008. It was a fabulous trip to the largest city in northwest Alaska. I ate beluga whale and was treated with great hospitality by residents. This was a work trip, and one of my most memorable visits to Bush Alaska during my six years living and working in the Great Land. Other photos from the 49th state can be found in my web site’s Alaska gallery. 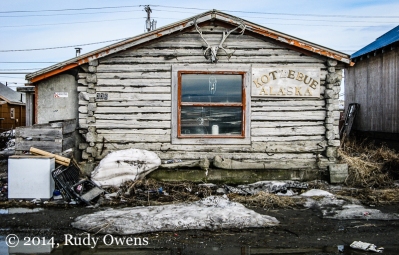 Shore Avenue runs along the water’s edge of the Chukchi sea (2008).

Caribou provide an important role in the diet and lifestyle of Kotzebue’s most Inupiat residents.

Off-road vehicles and snowmachines are the most common vehicles in Kotzebue (2008).

Plastic flowers and an old trophy are laid in remembrance at a grave (2008).